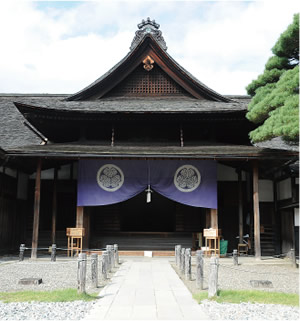 What is this building?
This was a local governor’s office during the Edo period. There once were more than 60 similar buildings in Japan, however Takayama Jinya is the only one left today.
It was in official use from 1692 to 1969.

What is a Jinya?
Prefectural and district governors used it as an office to govern Hida during the Edo period. The present building complex is called “Jinya” that includes residential space and storehouses for rice paid as tax.

What is the governor’s specific work?
Their main business is conducting legal trials and collecting tax. Takayama was well known for its abundant forest resource to produce timbers and an underground natural resource of gold, silver, copper and lead. This is one reason why the Shognate put Takayama under the direct control as an important economic area.