How to Catch a Bus

1.Buy a ticket at the Ticket Office (basic English is spoken)

Confirm the terminal number and departure time on the electric display board.Terminal numbers 1 to 6 are indicated for individual destinations.

2.Get on the bus from the front door (show your ticket to driver)

If you get on a bus other than at the bus center, take a numbered ticket and pay the relevant fare when you get off. Fares are shown on the display board in front of the bus. A fare for a route bus varies depending on the travel distance.

Even fare is applied for Machinami bus and Sarubobo bus.

3.Press the button when your destination bus stop is announced.

Please press the button so that your driver knows you are getting off.

4.Get off the bus from front door.

If you bought a ticket from the bus center, please give it to the driver or put it in a box next to the driver's seat. If you got on the bus other than the bus center, put your numbered ticket and the fare shown on the front display board in the fare collecting box. Please prepare some coins from the change machine as no change is available at the collecting box.
In case you have a one day open ticket, show it the driver and get off the bus. 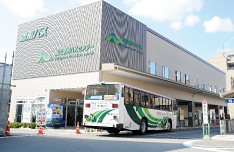 Once you exit from JR Takayama Station, you will find the Nohi Bus Center behind the police box (KOBAN). Loop bus services within Takayama City and for Okuhida and express bus services for Shirakawa-go, Tokyo and other cities are available from here.
There is another handy service available here; you can check in your larger luggage which cannot fit in a coin-locker for 500 yen a day.

People tend to think a taxi is more expensive than public transport; however, hiring a taxi privately could be more affordable and efficient depending on the number of visitors in a group. Sometimes a taxi is the only transportation if your accommodation is far from a bus stop. Different from big cities, you have to call a taxi company or wait for a taxi at the taxi stand near the Takayama Station or at busy streets. If you call a taxi, an extra 100 yen is additionally charged.
The initial fare for a taxi is 660  yen and 20 to 30 percent will be added at night.
Please note that more people use a taxi on weekends, at the end of the year or on snowy days and sometimes you have to wait more than one hour.
No tips are required for a taxi in Japan.

The Machinami Bus is a 30-minute roundtrip bus that runs frequently past the train stations, tourist spots, shopping streets, public facilities, hospitals and parking lots in central Takayama City.
The Sarubobo Bus runs from Takayama Station in the direction of Hida Folk Village and the Hida Earth Wisdom Center in the southwestern part of Takayama.

The one-day pass can be used on all Machinami Bus, Sarubobo Bus, and Nora My Car lines.